If you can afford the time & money to overdeliver, for anyone, you should. Full stop.

Why? Well, being a nice person has a lot to do with it, of course.

But it’s more than that. It’s social currency. 💰

As Phoebe discovered (F.R.I.E.N.D.S reference incoming) – there’s not really such a thing as a selfless act. Most things will at least make you feel good, but what if you could be good, do good and as a byproduct built opportunities and leverage for yourself as you grow.

This is the art (or science) of building social currency and here are a few tips to help you get started.

At it’s heart though, social currency is a simple idea: Do good for people, pay it forward, unconditionally, and, as a byproduct, people will want to return the favour (for the most part). You can call this leverage but that has negative connotations of an expectation of return. You could argue that social currency also has an expectation of return but at the very least you’ll just be a good person. Luckily, more of than not, people will want to repay your kindness with introductions, help, input, favours, etc. This is the business value of social currency. 💼

Gary Vaynerchuk calls this the ‘thank you economy’. Working on the basis of giving out value, value and more value, so that when you put out an ‘ask’ such as “buy my stuff”, people will want to do that. 📈

And it works. After 3 years of running free Yena events, people started to ask what they could buy. A question I didn’t expect at the time, yet here we are now with hundreds of members for a product and a business that wouldn’t have existed without social currency. 🙌

Understand that everyone is looking for something or someone and if you know someone who might fit the criteria, make it your duty to connect them. 🔗

This may not directly impact you at all. Many would say it means time out of your day to do something you’re not getting paid for, so why should you?

In connecting two people who have something in common with opportunities or “synergy” to explore, not only helps you grow social currency with the person who is looking but – if you’re a good connector of people (who aren’t annoying) – you’ll also grow it with the person in receipt of the intro. 🌱

It take practice, and a few slip ups — including a random intro to one of the most powerful people in Hollywood being batted back at you by their PA because they don’t work like that (yet that actually happened to me) but you’ll learn and grow both yourself and your social currency far more than any awkward situations that arise. Go make an intro now… I dare you 😉

Do it unconditionally. Whenever the time feels right to you. You never know when someone might need that little nudge or piece of motivation. You may well make their day… or save their life. Seriously.

Telling someone you’re proud of them, making an introduction to a potential client or partnership opportunity, sending someone an article you thought they’d like, sharing a book, a quote, a TED talk, telling them you loved a project they did (only if you genuinely do).

And people agree too… I’ve never really had a viral tweet (yet – holding out hope still) but this one got a lot of engagement, and rightly so. It’s a hell of a tweet. 😉 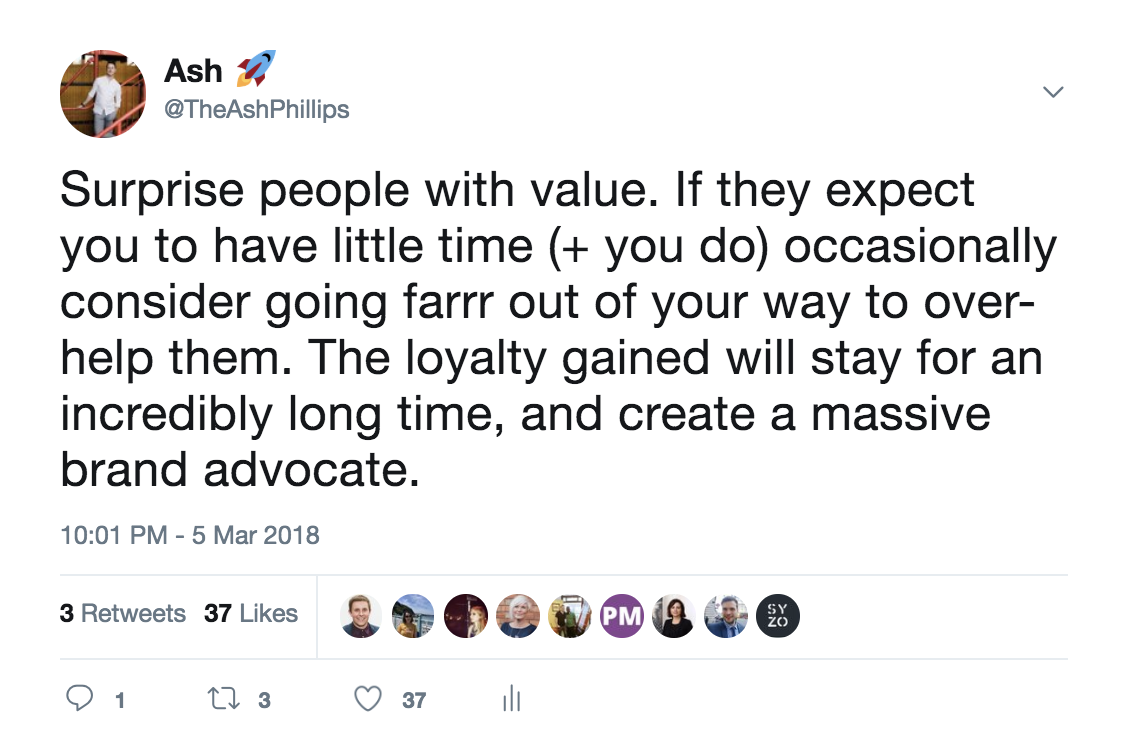 Make it a habit

A wise person once told me that habits are like a field of grass. When someone walks through them it creates a little indent in the grass. People tend to follow that indent, and the more they do, the more a path is carved out. Over time this becomes the default way that people walk through the field. The likelihood of someone walking through a different part of the field is very, very low because that default path is so clear.

This is how habits work.

Changing the path is hard, takes time, and repetition. If you’re not used to practicing the above then it’ll be difficult to do naturally throughout your work day. But do it consciously once, twice and a few more times (21, apparently) and a new path will be formed as the default route for your thought processes. Making the act of building Social Currency second nature for you forever more! 🙌

People are smart. They’ll see right through ploys to get leverage & favours. 😒

This is why all of the above needs to be natural and done from a good, giving, unconditional place. If you attach conditions, then it’s not a bad thing. It’s business.

Social currency is different. I don’t want to be “that guy” but it’s a way of life (wow, cringe). Work it in and when you do that business it’ll be easier and nicer than ever before! 🚀

Hopefully implementing these can help you not only make the world a better place but also to open doors and create opportunities you hadn’t realised existed.