The product you end up selling is never the product you started selling. So don’t get disheartened if people aren’t into what you’re up to right now.

Rather than stopping, ask them why, don’t take it personally, adapt, iterate, retry and survive. Keep doing this until the ‘survive’ becomes ‘profit’ and BAM, you’re in business.

Putting my philosophical hat on for a moment… 🧐

At our most basic, humans need food, water and shelter. Not stuff. Not business.

Yes, I understand that point puts myself in danger here of undermining my whole business and the business of everyone in our community (sorry guys) 😂

But anything other than that is actually surplus to survival requirements so that means that anything a commercial businesses sells that is in fact ‘value add’ is just that. Not a necessity. I promise, I’m getting to a point here…

My point is that you should stop stressing over your product so much and start taking things to market because based on the point above, business is simply the art of convincing people to trade cash for something they want. Not coming up with something so incredibly perfect that people throw money at you because they need it.

(I’m not saying you should sell a crappy product, but if you can then that bodes well for when your product is better.)

In my opinion, someone confident can sell a poor product and start a business. But someone who can’t sell, could have the best product in the world, but not have a business.

At our Bath meetup this week, Will Hibbert of Forest to Home – an awesome custom furniture company that just kitted out the world’s first Nino Nando’s – stated that adaptability was the key to their success.

Their ability to change and pivot in line with what the market was telling them was in demand, meant they could provide the right ‘product market fit’ and create something that worked.

However, what if you’re pre-launch? Well, Will says “the best way to learn about a market is to be in the market” and I couldn’t agree more.

So ship your product ASAP. Get it out there. Don’t be ashamed. Use things like ProductHunt to get critical feedback and acclaim. Then iterate, FAST until it’s near perfect (it will never be perfect and you have to be ok with that because if you ever think it is, you’re being complacent and that’s when you’re at danger of being Blockbuster vs the innovators of Netflix… so beware).

(P.s. Life goal achieved of getting a Ross Gellar ‘PIVOT’ GIF into an email newsletter… 😂)

I was nowhere near happy with our membership for a whole year while we figured out what people really wanted but people still paid us during that period because we delivered some value.

Yes, it was messy, but it got us through to a point where we are now confident in our product and it’srolling out internationally.

But here’s a piece of advice I’ve shared a few times this week which is quite controversial but I wholly believe in it – sometimes research matters less than you think because people do not know what the hell they want.

I could list hundreds of inventions that I almost guarantee most people would think was a bonkers or needless idea before it ever existed in it’s full glory – from electric toothbrushes from an app to book a taxi (Uber).

Things like this are often bought to market (at least in MVP form) in spite of feedback from potential users/customers because the truth is that they don’t have the vision you do. The product in your mind may look incredible and work in an amazing way that people just won’t get until they can experience it.

So while understanding a market & getting feedback is a good idea, if you can get something simple to market fast, get initial feedback and then improve, persist and adapt, instead of going all or nothing, you may just make it to something sustainable/profitable in the long run. 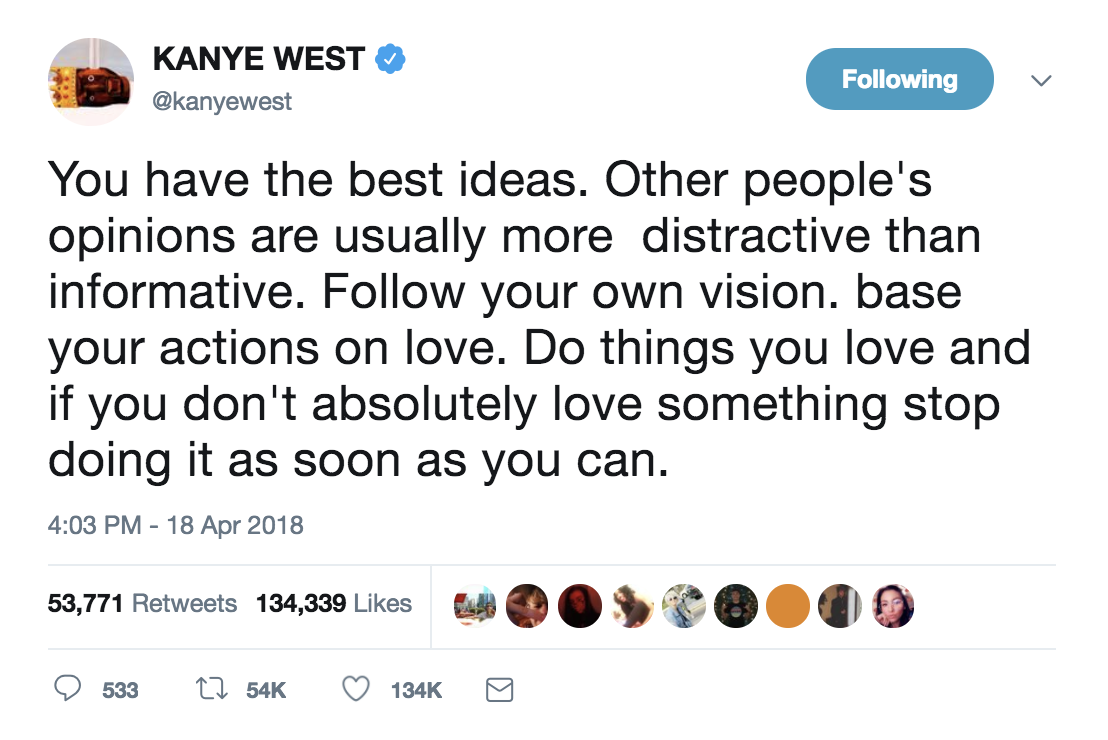 I mean, you can’t really argue with Kanye, so…

The longer you persist at something that others may be competing with you on, the more people will fall away, due to giving up, as time passes. Eventually, you’re left as the only one. 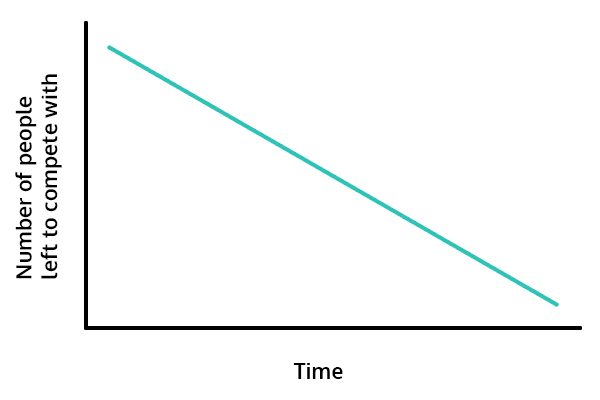 Then, as long as you’re not crazily pursuing something that really won’t work – and I hope you’re self aware enough to recognise persistence vs blindly chasing something unachievable – over time, your competition will fade, and you’ll be able to attack a market you’ve created.

Of course, there are lots of variables here but simply if you do the following, it’ll get you on the right track:

So there you have it.

Don’t feel put out by thoughts of failure. You might not actually need to quit.

Just learn, adapt, persist, and grow. The more of this you do you learn how powerful it is for creating a greater product and growth over time.

Right that’s it for this week. It proved a tough one to write as it’s been super busy here with partner proposals, plans, event expansions, etc. Next week I hope to be more prepped but you know how it is…